Whew... What a season! The 2019 Southern Knights made corps history, by making finals in our first year in Open Class, finishing in 9th place. We also obtained our highest score in our corps history with a 77.475! All summer long, this group worked hard and through immense adversity. We lost many family members along the way this past year. These were the names listed on the banner at the end of our ballad. We honor them by including them in our show this year... The fans at every show we performed at have been great! (The judges were ok too). :) The crowd let us know that they enjoyed our performance by applause at the show. But also by messages of support and encouragement after the show. This is why we do drum corps! We hope to entertain, and strive for excellence in our performance every year. This year, in season 5 of our short history, I think we connected with the audience the best! The standing ovations make it all worth practicing every weekend in 95-100 degree heat here down south!

The Southern Knights have just completed our second season in DCA competition with a 5th place finish at the World Championships held in Williamsport, Pa. We achieved our highest score in our corps 3 year history with a 76.325! Our best captions in prelims were a 2nd in Music Effect, 3rd in Percussion, and 4th in Guard and Music Ensemble.

The competition was fierce in Class A this year, with 3 of the top 4 finalist corps having been Class A World Champions previously.
Carolina Gold won their 2nd Class A world Championship with a tight finals performance, coming into finals from prelims in 2nd place. They won their first title in 2012.

The Southern Knights are DCA Class A Finalists!

The 2017 Southern Knights made history by making Finals in our very first trip to DCA World Championships, and by being the first DCA competitive Corps from the state of Alabama in DCA's 53 year history!!!

We performed in prelims on Saturday, September 2nd and performed well enough to advance to Finals competition on Sunday, finishing the preliminary competition in 4th place. Maintaining that 4th place slot in Finals , we finished off the historic season with a final score of 74.60!!!

In their first year of field competition, SK made a splash at several DCI shows in Alabama with some impressive numbers. It's a shame DCA chose not to allow the Knights to formally compete. These guys mean business and would be right in the running for a Class A title this year. The show is full of lots of great solo, small ensemble, and full ensemble playing. If you like the classic G bugle sound, you owe it to yourself to check these guys out next season. Seriously. They will become a force to be reckoned with in DCA South.

Highlights: The drum major comes onto the field for some very nice solo soprano playing during the ballad, and the very competent horn section is headlined by some strong contrabasses and a few superstar mellos. Percussion is very good, especially in the corps' first season with a full drumline. 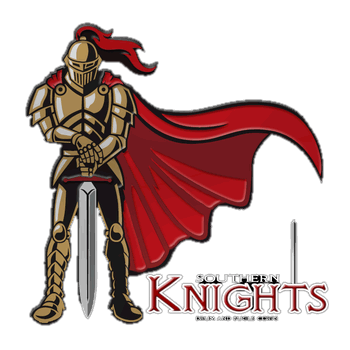 The Southern Knights Drum and Bugle Corps is a new Drum & Bugle Corps in the Birmingham, Alabama area. However the corps leadership has over 100 years of experience in the performing arts arena.  The purpose of this organization is to provide our members with an educational program of the highest quality, with the opportunity to develop and continue their musical, visual arts, drum corps and color guard/dance performance abilities in a structured environment. Developing real life skills in teamwork, self discipline, preparedness, accountability, critical thinking, and leadership - all in a family atmosphere that fosters relationships that last a lifetime.  The Southern Knights is a 501(c)(3) non-profit organization. As such, we depend on generous donors to help with the financial needs to operate. Donations are tax deductible under IRC Section 170.

Thank You To Our Sponsors